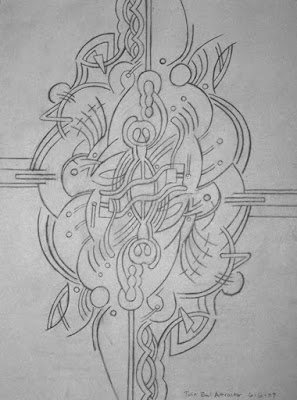 These are the energies I felt and drew when I focused on the energies of attracting my twin flame. To view other designs for different energetic needs visit my website at www.AriStoneArt.com
Posted by Ari Stone Art LLC at 5:57 PM No comments:

Email ThisBlogThis!Share to TwitterShare to FacebookShare to Pinterest
Labels: Art by Ari Stone 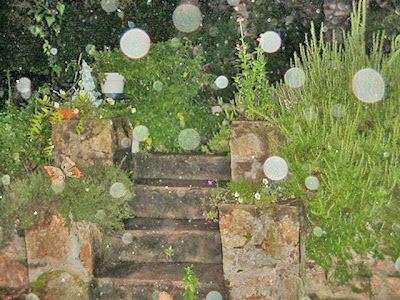 This is a photo I pulled off the web, as I liked how many orbs they caught on film in broad daylight. www.freewebs.com/hidyaphrodite/thegardenspot.htm

I find orbs to be fascinating. Some people try to "explain them away" as particles of dust in light or as light reflections of one sort or another. However, not only is there a lot of info on the web but, my mom regularly "calls" them in and takes photos of them . . . in the dark. She has photos where there are tons of these white orb beings all over the place! Its really cool too when I take them into photoshop and zoom in really close on some of them. When I do that, there are some amazing colors around them. Some have purples and greens etc. I don't think this video is the best but, it is a good one for those who want the 'facts' and are skeptic of things . . . one thing I don't agree with is the 'scary' factor they try to create. I believe orbs are beings in other dimensions and that they are loving beings helping us transmute energies here on Earth to a more loving vibration.

Posted by Ari Stone Art LLC at 5:46 AM No comments:

Not only am I fascinated with magical studies, I am also very into art as well. Bryan De Flores is an artist who underwent a dramtic consciousness shift on Dec 4,1996. Since then he has been channeling images of the divine blueprint for a better world, via images. He has created 100's of pieces and each piece is designed to activate DNA within a person and alter consciousness. I ordered various works of his and I love them all. I used his 21 day program and I would have to say that my path has become VERY clear since then. I would also say I have been having more heightened dreams of communication with other realms of existence as well. A trip to Serius last night. Was very interesting.

Visit his website http://www.bryandeflores.com/ to see more images. He will do custom designs for personal needs of activations and 'stargate' artwork. the idea of a stargate, is that it is a portal to another world and he will custom design one for your needs. He has artworks for weight loss, attracting money, the crystal skulls, connecting with ETs and a TON of other things for heightening consciousness and awareness. At the very least . . . they are beautiful to look at!!!

I also love the artwork Ciro Marchetti does! He is amazing with his usage of lighting. He has designed Tarot card decks (cards used for spiritual divination) and his artwork is stunning. I love using the Gilded Tarot deck, designed by Ciro.
Posted by Ari Stone Art LLC at 5:45 AM No comments:


*Note: Video does not contain sound.

This video shows you how Reiki actually does change and correct your aura. You can visit the main website at www.healingreiki.com

Everyone has an aura. Most people are familiar with the chakras; the 7 main energy centers in the human body. Few people realize that these are actual frequencies of light and energy and vibrate at specific color frequencies.

Your aura is a constantly changing and adjusting to your emotional, mental and physical state while your chakras are spinning wheel of color (that remain the same) and receive and transmit energy .

Here are more in depth definitions as posted on http://www.wejees.net/aura.html


"AURA - is your psychic energy body- it's the energy produced by your life force, and it emanates all around you. A lot about your mental, emotional and physical state is reflected in your aura. This can be percieved in the pred

ominant color of your aura.... but please keep in mind, the aura is constantly changing in color, shape and size. Also, the strength and integrity of your aura will have a strong effect on yo

CHAKRA - is a Sanskrit word meaning "spinning wheel of energy". These energy centers within our bodies receive and transmit energy, and each is situated at a major endocrine gland, and nerve bundle within the physical body, called a plexus. Each chakra is connected and associated with a different part of the body. There are seven chakras. Each chakra has a color, and different gemstones and crystals can be associated with these. Understanding and using your chakras can promote physical, emotional and spiritual healing, and can lend energy to your manifestational work.

psychic talent. In the book "Exploring Auras" by Susan G. Shumsky she teaches you how to start working with your eye's peripheral vision to start seeing auras. On page 86 she says, "In 1970 Cambridge biologist Oscar Bagnall proposed that auras are viewed with rods - sensory neurons on the side of the retina, responsible for night vision. So auras are more easily viewed with peripheral vision, out of the corner of the eye, rather than focusing hard and directly on them. "

I myself have seen the light body envelope around myself (without the aura cameras) and at one point I even began seeing some colors; when I was practicing seeing my aura.

It was pretty cool. Everything has an aura, not just humans. You can have a photo taken of your aura at many metaphysical shops. One being Planet Earth Rising in old Folsom. Usually the camera is at the store during the psychic fairs (held the first Saturday of every month from 10-6) and sometime you can get more in depth computer aura readings from people who have an aura photographing program connected to their computer.
Posted by Ari Stone Art LLC at 5:45 AM No comments:

This is a beautiful clip of an elephant and a dog who are the best of friends. Inspiring.
Posted by Ari Stone Art LLC at 5:43 PM No comments:

Ok Gang we are up and running now. Here are some links of interest to get you started on some unique topics as they related to science and metaphysics. Thank you for visiting.

Matrix Energetics - "Miracle" healing by way of science and physics.

BioElectric Shields - Enhance your aura and strengthen your personal energy field. Even Cheri Blair (the wife of Tony Blair, the Prime Minister of England) wears one of these . . . find out why . . .

Ho'oponopono- the Hawaiian system known as ho 'oponopono and how Dr. Hew Len cleared out a criminally insane ward by never seeing a single patient.

Bryan DeFlores - Artist who channels artwork that changes DNA and reality . . . see what you think.
Robert Scheinfeld - do a google and search for his book and articles about his book titled "Busting Loose From the Money Game" . . . manifesting money from the zero point field?

Some Additional topics of interest to Google and research

ChemTrails - The grid patterns we see almost daily in our skys that contain high levels of metals and spread to look like clouds. Find the difference between Cem-Trails and Con-Trails.

Posted by Ari Stone Art LLC at 8:09 PM No comments:

How You Can Perform Miracles

Matrix Energetics with Dr. Richard Bartlett, what is it and who is he? How did he go from chiropractor to miracle man? Why does it work? Find out why you should care about Matrix Energetics by watching the above video.

Matrix Energetics can literally change everyones lives. What used to be relegated to the world of religion as miracles, is now readily accessible to everyone and backed by science, reasoning and logic.

Recall that Pineal gland; as mentioned by Levi Cox; in an earlier post. That is where much of (your) 'reality' as we know it, is created. Dr. Richard Bartlett teaches you how to consciously utilize your Pineal glad to create any reality you want and the science to understand it.

Posted by Ari Stone Art LLC at 8:04 PM No comments:

Dr. Emoto was fascinated to explore what things affected waters behavior. He thought is would respond to non-physical events. He then did multiple studies of various water drops after applying mental stimuli. Much like a prayer, or groups that would think a same thought towards the water drops that were then placed onto petri dishes with each water drop approximately 25cc in size. Aas many as 50 dishes at a time with water drops that had different thoughts projected onto them, were then place in a freezer at -25 degrees Celsius for about 3 hours. After that they were placed into a refrigerator at -5 degrees Celsius where a microscope and a camera are set up to photograph the water crystals. Photos were taken of each individual water sample in each dish. They were sure to photograph images of the originial water and of the same water that had then been spoken, thought, or prayed over. The results are stunning, beautiful crystals form for beautiful and positive loving thoughts and scattered and nasty water reveals itself when nasty thoughts are projected.

According to USGS the human body is up to 60% water and in more in various organs. Others say we are 90% water. Being as we are largely water based beings, how then do you imagine your words affect your body's cell structure, as well as those around you? Are your thoughts positive and encouraging or are they something else? Now science has proven why we are to 'bless' our food (at least our water, for sure) as it actually alters is physical structure. Thus, it is important to be a conscious thinker not only towards yourself but to others as well.

You can learn more from watching a video titled "What the Bleep do we Know" as well as reading Dr। Emoto's books.